Academy of St. Martin in the Fields Chamber Ensemble Outreach 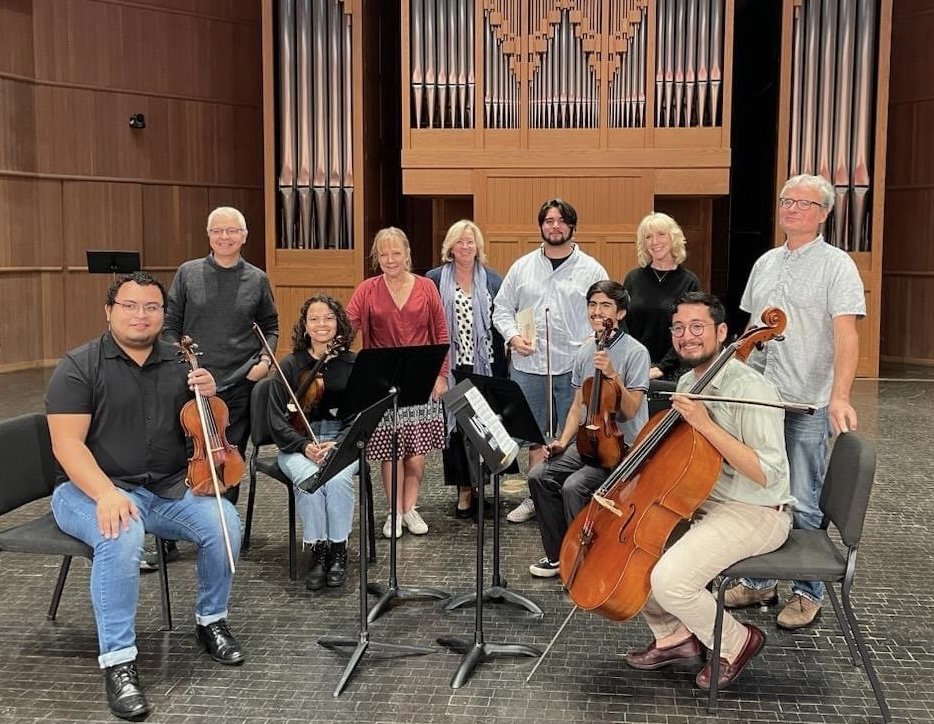 Academy of St. Martin in the Fields Chamber Ensemble Outreach at UTSA Recital Hall on October 17, 2022

On the rainy morning of October 17 at 9:30 am, 23 music students and several music lovers from the general public gathered for two student performances and instruction from four members of the Academy of Saint Martin in the Fields: Martin Burgess & Jennifer Godson (violins), Fiona Bonds (viola) and Will Schofield (cello). Among the audience members was Dr. Nicole Cherry, Assistant Professor of Violin and String Area Coordinator at UTSA, who helped to organize and lead the masterclass. The hour-long class took place in UTSA’s beautiful recital hall, which felt more intimate than usual, with on-stage seating for the eager, young audience.

The class began with Andre Alvarado, a student of Allyson Dawkins, performing the first movement of Carl Philipp Stamitz’s op. 1, his Viola Concerto in D major. Dr. Jeong-Eun Lee, staff pianist at UTSA, accompanied him expertly. Fiona Bonds helped Andre to relax, sustain more through his phrasing, and illuminate the different characters, all of which served to spruce up a work that (even Bonds admitted) requires some tasteful enhancement from the performer. Martin Burgess guided Andre on different ways to use the bow, including playing closer to the bridge in order to achieve a different color to his tone. As Andre initially struggled to find confidence, both Bonds and Burgess reassured him that the intense pressure of a masterclass is an unusually uncomfortable situation unrepresentative of the “real world” of musical performance, but that thinking about the characters in the music and taking some good, deep breaths during the work’s opening would help to relax him. 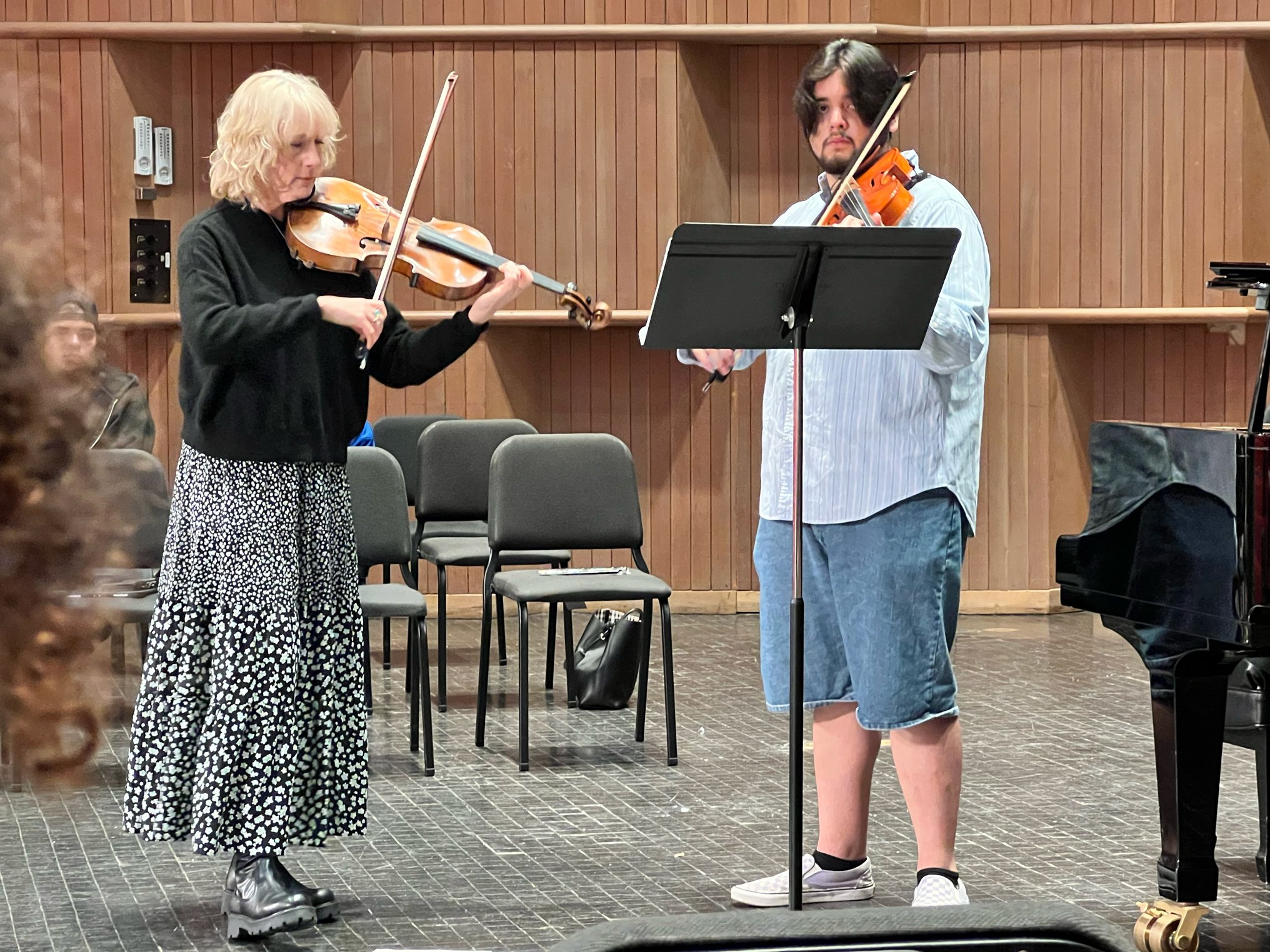 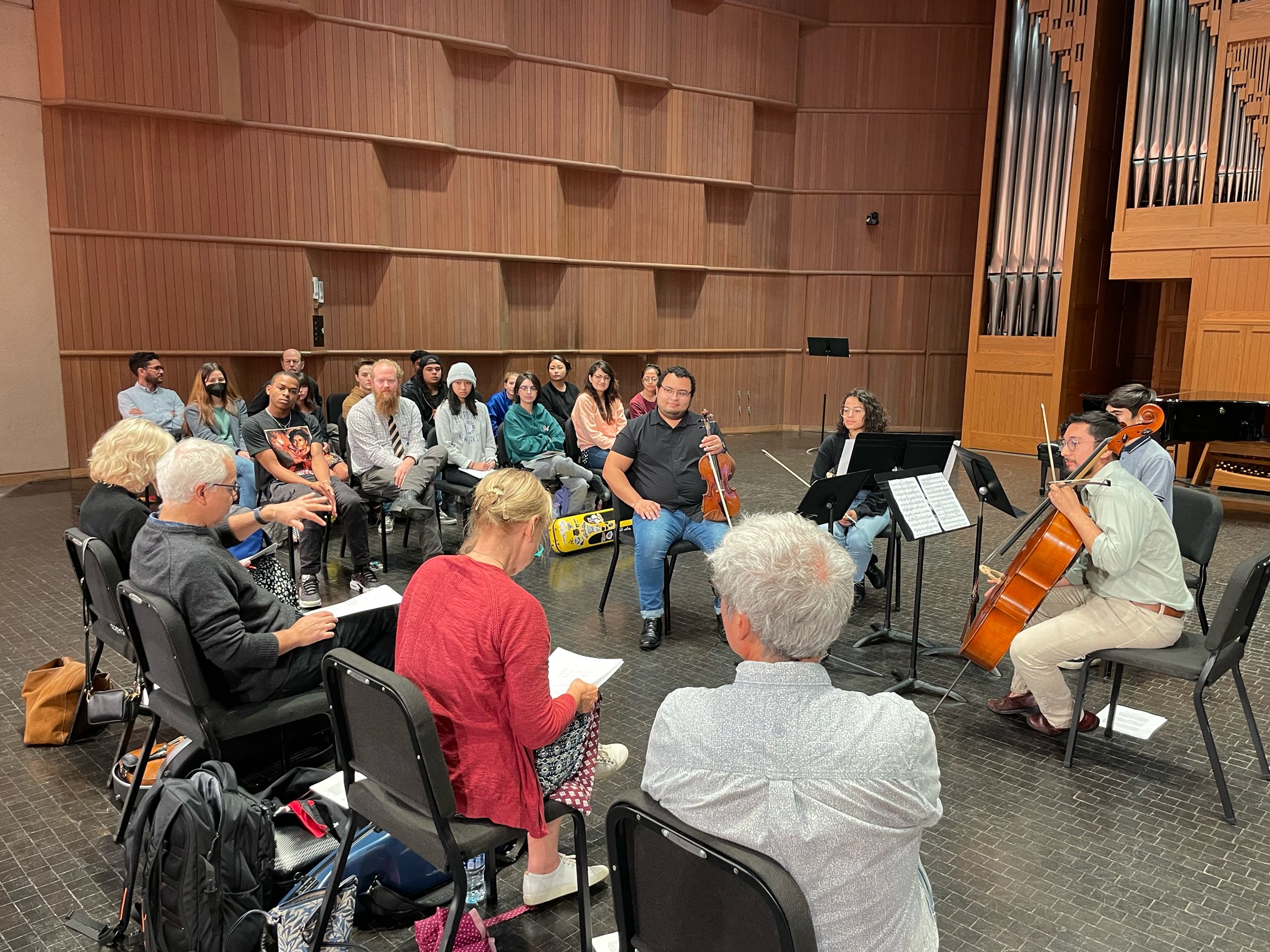 All four of the Academy musicians… discuss proper balance in a quartet, the roles of each of the instruments, and the importance of following the dynamics more closely.

The second performance featured the first movement of the String Quartet no. 5 by Brazilian composer Heitor Villa-Lobos, performed by Richard Peralta & Jaymes Edwards (violins), Jakob Meza (viola), and Isaiah Valdez (cello). As pointed out by cellist Will Schofield, it is an unusual quartet with plenty of dissonances. All four of the Academy musicians chimed in for this portion to discuss proper balance in a quartet, the roles of each of the instruments, and the importance of following the dynamics more closely. In a passage marked piano (soft), the accompaniment laid by the cello and second violin creates a smoky, jazzy feel underneath a soaring melody from the first violin. The four Academy members helped the students achieve a soft, sultry color from the accompanying instruments, leading to a more captivating and vivid mood.

The masterclass capped off with a short Q&A, during which Bonds explained some unusual qualities about her particular viola, and Burgess (after being asked the grand question, “What are the most important things when playing chamber music?”) stressed preparation and active listening as significant keys for quality chamber playing. He also mentioned that listening to high-quality recordings and live performances can benefit one’s ears and sensibilities and not be afraid to take what one hears and apply it. He finished cheekily, “Great composers stole all the time, why shouldn’t you?”