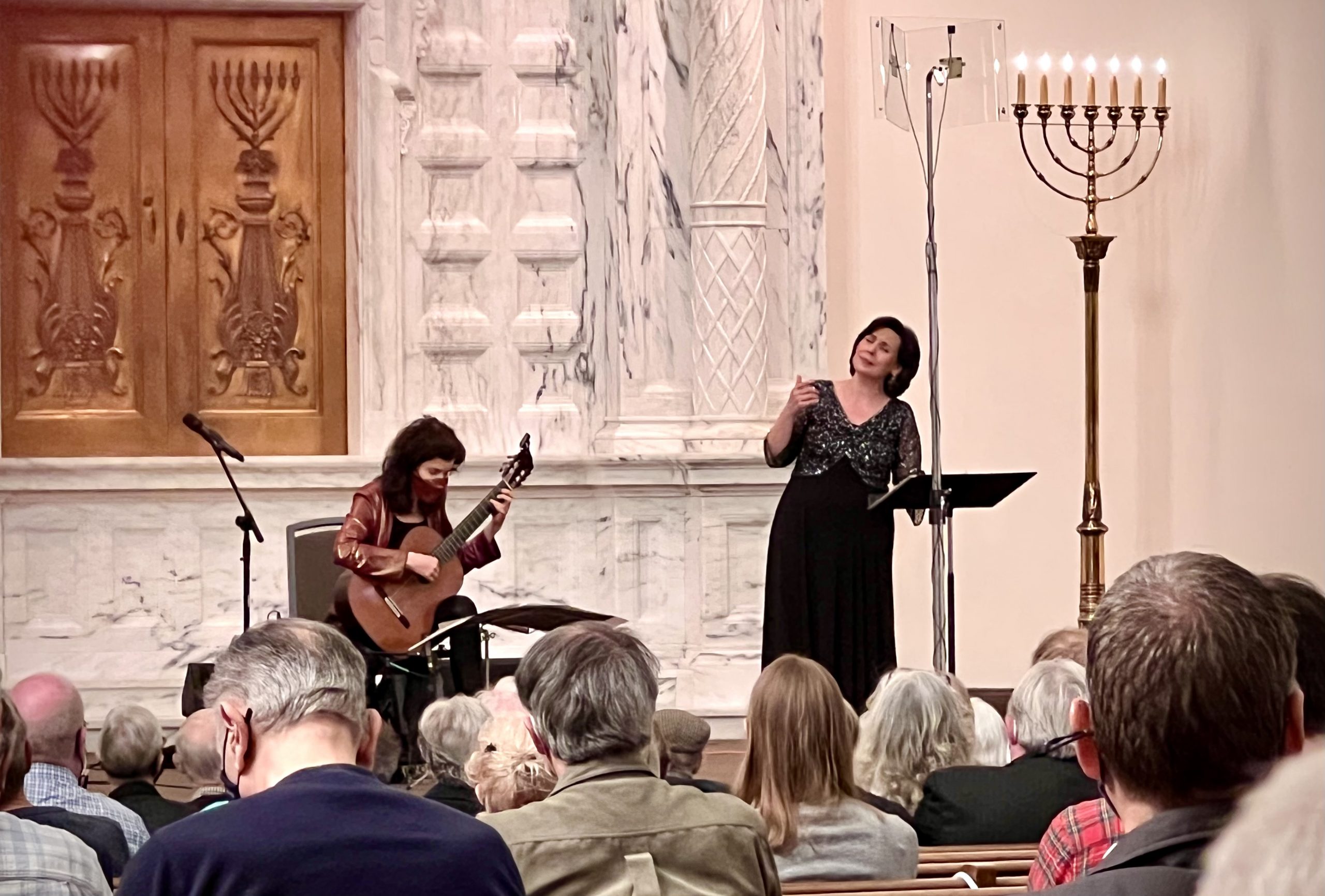 Thank you Sharon Isbin and Jessica Rivera  for a low-cost, no Covid pre-test, no baggage check trip to Spain and South America!  If you didn’t know before why these are such great destinations, you know now.  As is often the case with our SACMS concerts, performances reveal music that is unfamiliar to us but that let us enjoy and learn new modes of expression:  algo diferente.

There is so much beauty, sweetness and joy in this music, and these two artists are maestras in interpretation.

Listening to this concert, I could see in my mind’s eye the Moroccan tiles in Spanish courtyards, the elaborate fountains that grace so many unexpected places in Argentina, the incomparable sun of Brazil – and the people, always the people with their drama, their ability to express in music and words the emotions of a quintessentially Latino heart and soul.  There is so much beauty, sweetness and joy in this music, and these two artists are maestras in interpretation.

Two notable qualities of technique:  even the best classical guitarists occasionally produce an unintended sound that is somewhere between a groan and a scream as their fingers slide over the frets of their instrument.  Not Isbin.  I didn’t hear a note that wasn’t supposed to be played and played with grace and precision.  As for sopranos we know and love, they are sometimes unsure in the lower ranges of their voices.  Not Rivera.  The warm, almost contralto range she sang in the lullabies had not a trace of strain but were as natural to her as her pure soprano.

With the possible exception of Asturias by Albéniz, the selections were probably unknown to most of the audience, but the responses (while somewhat hesitant at first) were enthusiastic.  How quickly we can be transported from the everyday to the exotic!

…two musicians, one guitar, one voice – a minimalist expression of the art of music – could produce such a heartfelt, emotional response.

If it weren’t so relaxing and gorgeous, I would be tempted to call this one of the most sophisticated concerts SACMS has presented.  And indeed, it was in the sense that simply two musicians, one guitar, one voice – a minimalist expression of the art of music – could produce such a heartfelt, emotional response.

The addition of translations of the lyrics to the program was much appreciated.

Please plan on attending our next concert, the four ladies of the Aizuri String Quartet will help us celebrate Women’s History Month with a program by all female composers –  please note that this concert on March 20, 2022, will start at 4:30PM at Temple Beth-El.