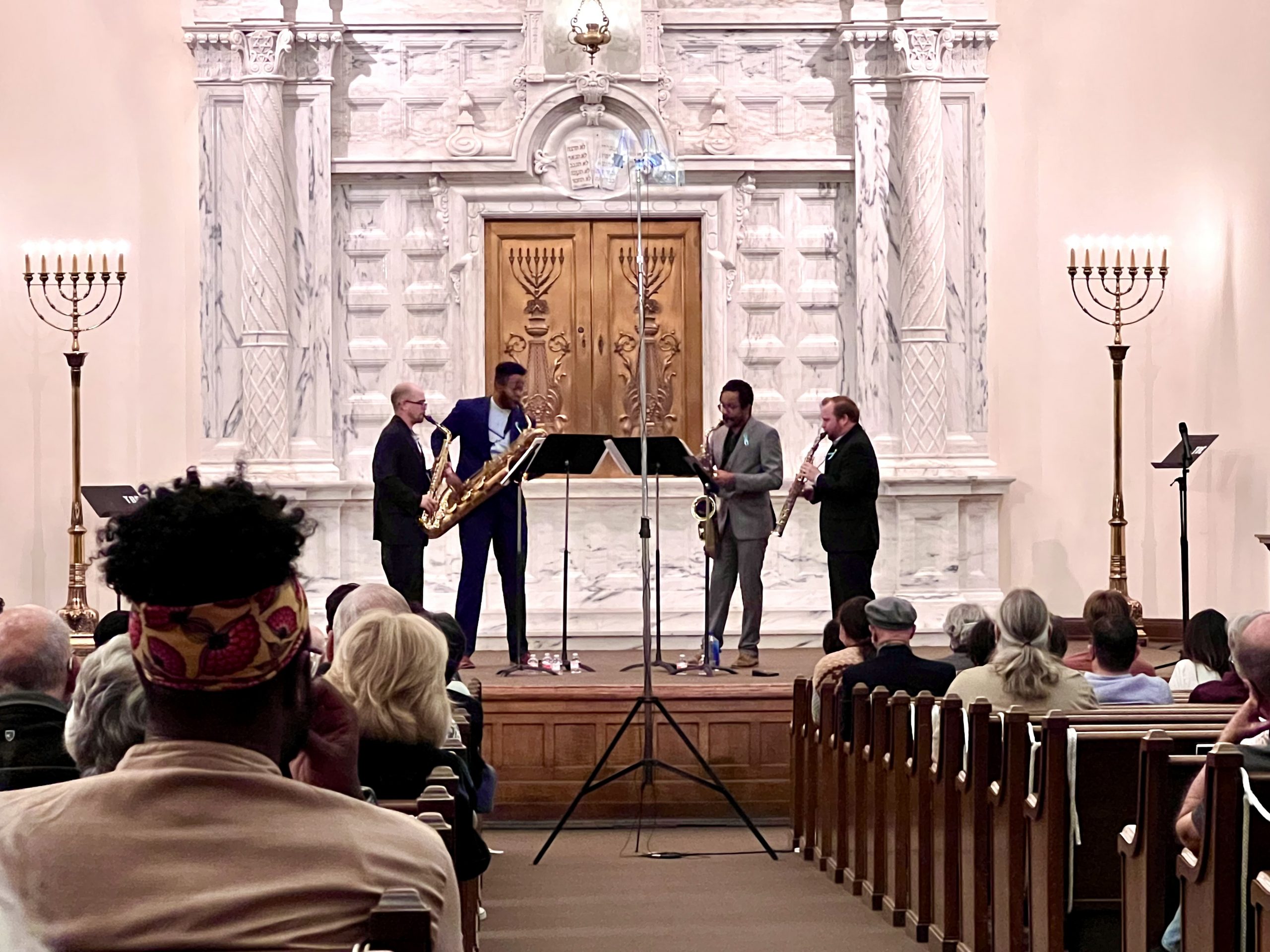 It turns out that a saxophone is not the product of the fevered imagination of a Nineteenth Century pipefitter.  Indeed, in the hands of the Kenari Saxophone Quartet, it is a sinuous, elegant instrument which produces spools and whirls of wonderful music.  Who knew?

I did a little research –  FYI:  rather than a pipefitter, the saxophone was dreamed up by one Adolph Saxe, a Belgian musician and instrument maker.  In the 1840’s, it occurred to him that there was a missing link, tonally speaking, between the “brassiness” and blare of the brass instruments and the cool agility of the woodwinds.  After tinkering with various designs and tones, he produced the tenor saxophone, named it for himself, of course, and produced this quirky instrument in 1846.  Being an over-achiever, he designed no less than 14 versions of the saxophone.  It is now down to a few, depending on the key to which it is tuned.  But as a  relative newcomer to orchestral compositions, the various iterations of the saxophone aren’t often included in the grand music of classical composition.  Enter groups such as the Kenari, proving that this somewhat clumsy hybrid of brass with a woodwind cap is indeed ready for prime time.

This music is truly unique, meant not for violins, violas and cellos, but precisely for a soprano saxophone (played by Bob Eason), an alto saxophone (Kyle Baldwin), a tenor saxophone (Corey Dundee) and a baritone saxophone, a 12-pounder played by Steven Banks.

Admitting my skepticism, but curious nonetheless, I listened this past Sunday afternoon at Temple Beth-El  with a degree of wonder and downright shock at the sounds these four instruments could spin out.  I was prepared for mimicry of string music – and I was surprised by the tones, the subtleties, and just the sounds and sonorities that came at me from these four instruments.  This music is truly unique, meant not for violins, violas and cellos, but precisely for a soprano saxophone (played by Bob Eason), an alto saxophone (Kyle Baldwin), a tenor saxophone (Corey Dundee) and a baritone saxophone, a 12-pounder played by Steven Banks.

Right from the start, with a seldom-performed Piazzolla tango, I could tell this was not bandoneon music! This was indeed algo diferente. Instead of the dark, sultry tones that I usually associate with Piazzolla’s tangos, the Kenari’s version of Michelangelo ‘70 was lithe and jazzy. Each phrase ended with an exclamation point, exuding the energetic joy of the dance.

There were also selections on the program, notably the Schumann, Bach, and Mendelssohn, which had been arranged and adapted for saxophone.  They didn’t suffer in the translation.  The opening Aria of Bach’s iconic Goldberg Variations was simply sublime.  I especially enjoyed the lyricism and elegance of the Mendelssohn: it was pure gold, not brass.

Quantum Shift (2017) by Mischa Zupko was an 8-minute virtuosic powerhouse of a piece commissioned by the Kenari Quartet – this high velocity work, “..a window into the sporadic lives of four electrons” – summarily took one’s breath away!

Pulitzer Prize and three-time Grammy-winner Jennifer Higdon (b.1962) wrote Short Stories in 1996, wanting  “..a work with as much diversity in the characters of the movements as possible …each telling a different story ..” Listeners at Sunday’s concert would have no trouble visualizing in their minds’ eye the three stories the Kenari Quartet chose to evoke – Splashing the Canvas (inspired by Jackson Pollock), Lullaby, and Chase.

The final selection on the program,  Mountain Road (1997), by David Maslanka (1943-2017) who is a master in the art of composing for the saxophone, followed the model of a Baroque cantata – or so writes the composer.  I’m fairly certain that a Baroque musician wouldn’t know what to do with a saxophone, but would most certainly have enjoyed this composition as much as I.

…the Kenari Quartet gave a whole new meaning to the ability of master instrumentalists to bend these complex tubes and valves into glorious music.

I gave some fleeting thought to Charlie Parker and other jazz greats who sent the saxophone spinning off into the sound of New Orleans, but listening to the Kenari Quartet gave a whole new meaning to the ability of master instrumentalists to bend these complex tubes and valves into glorious music.  Who knew indeed?