Clarinet is to classical as snow is to San Antonio:  rare, but beautiful.  If you are a fan of string quartet-genre chamber music, a classical clarinet concert may just be a welcome surprise – and especially if the clarinetist is Anthony McGill, the principal clarinet of the New York Philharmonic.  And if, like me, your acquaintance with solo clarinet is primarily jazz or as a colorful addition to the wind section of a symphony, you are in for another surprise.  The expression that Mr. McGill pours into that slender, multi-keyed instrument combined with his ability to find its emotional range is simply remarkable.

The melody (which is hardly a melody) is intense; it twists and turns in pain, leaving the listener exhausted.  It is one of those compositions, I found, that is not enjoyed, but rather absorbed and understood.

At this most recent San Antonio Chamber Music Society broadcast of concerts from the Chamber Music Society of Lincoln Center, Anthony McGill performed three unique compositions that made me wish that my computer had better sound quality – I didn’t want to miss a note.  He began with the solo movement of a very dark quartet, “Abyss of the Birds” from Quatuor pour la fin du temps by Olivier Messian.  Written in 1940-41 from a Nazi prison camp, it is a tone poem of tragedy and weariness with occasional sparkles of wonder.  The melody (which is hardly a melody) is intense; it twists and turns in pain, leaving the listener exhausted.  It is one of those compositions, I found, that is not enjoyed, but rather absorbed and understood.

The Sonata for Clarinet and Piano by Francis Poulenc is also “soul music” which uses all the varied colors of the clarinet.  As performed by Mr. McGill and pianist Gloria Chien, it ranges from a strangely titled Allegro tristamente through a  Romanza movement, which is a deeply sad aria, to its final Allegro con fuoco movement which is humorous and quirky.  There is a continuous line, however improbable, from first through third movement that demonstrates a thought process filtered through the soul of the clarinet.  As an interesting side note, this composition was commissioned and premiered by none other than Benny Goodman who was, in fact, a very able classical clarinetist.  Leonard Bernstein accompanied.  That’s a performance I would have loved to hear! 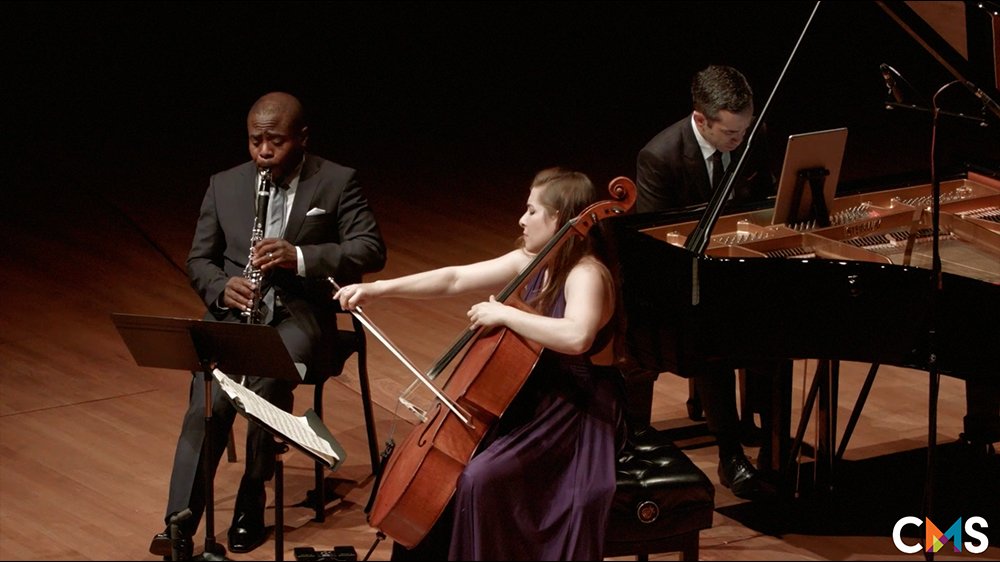 The final composition, the Brahms Trio in A Minor for Clarinet, Cello and Piano performed by Mr. McGill,  with Alisa Weilerstein, cello, and Inon Barnatan, piano, seemed to represent a struggle by the composer to find a way to bring these three instruments together.  The clarinet and cello together had a richness of tone and in the Allegro movement, the repetitive phrasing of the three instruments created a waterfall of sound.  The third movement, Andantino grazioso, was sweet and somber and the Allegro movement was fiery, but to me the whole composition was cobbled together.   The musicians were adept and skillful in their interpretation, but I admit to a certain degree of ennui about midway through.

This concert will be available for viewing on our website sacms.org until midnight, Saturday, March 20, 2021.

In retrospect, I am still in awe of the classical solo clarinet.  I have certainly heard clarinet solos performed in the midst of symphonies and concerts, but the sound of a clarinet that skips and slides around the edges of other instruments is a very different experience than listening to the clarinet played by a master musician on its own, center stage in all its unique glory.  I am definitely going to listen to this concert (as I can until March 20) again.  And I’ll be watching the San Antonio skies for signs of snow.

We probably won’t have more snow, but we will have another concert on the horizon: The Complete Brandenburg Concertos by Bach – and with it, another illuminating chat with an artist via Zoom (follow us on Facebook or Twitter for details).  Mark your calendar for Sunday April 18 at 3 p.m. and prepare for a musical feast.