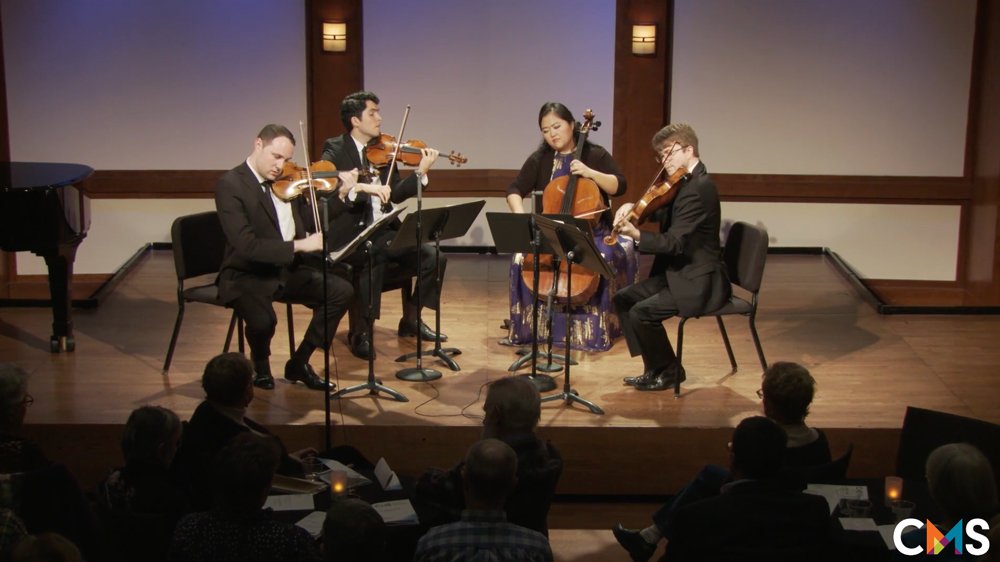 Having been robbed of my relaxing Sunday afternoon concert by the dreaded Computer Glitch, I was constrained to listen to this glorious concert on Monday afternoon – after I returned from the dentist.  Fortunately, I thought, the music of Mendelssohn as performed by this outstanding group of musicians would ameliorate my misery.  I thoroughly enjoyed the first movement; if there were a Mendelssohn fan club, I would join.

As the dentist’s anesthesia began to fade, the Calidore came to my rescue as they flawlessly performed the tragic Quartet in F minor. Quite a departure from his earlier works, the F minor is at times heavy-hearted and at times tumultuous.  The Calidore – Jeffrey Myers and Ryan Meehan, violins; Jeremy Berry, viola; and Estelle Choi, cello – gave Mendelssohn the care and expression this quartet merited.  He had just lost his sister (who was his dearest friend) and he was soon to follow her; even the last movement, the Allegro molto with its frantic pace, had an aura of terrible sadness. With sensitivity, imperceptible precision and an easy grace, the Calidore brought this difficult composition to life.

The Calidore, together for 10 years, is considered a “young” quartet and, in comparison to their mentors and idols, the Emerson, they certainly are.

The Calidore, together for 10 years, is considered a “young” quartet and, in comparison to their mentors and idols, the Emerson, they certainly are.  You can hear the precision of the Emerson and elegance of the Guarneri, another of their idols, in their performance.  In a pre-concert interview, violinist Jeffrey Meyers, spoke of the importance of combining individuality with group cohesion; they certainly seem to have accomplished this goal.  Another quality spoken of by Wu Han is the discipline the Calidore demonstrates:  their ability to meld their styles and musical philosophies into a unified performance.

The Dvořák Quintet in G major was just the music to combine with analgesics.  The Calidore, with the addition of double bassist Xavier Foley, beautifully expressed the joy and their enjoyment of this rollicking composition.  Violinist Meehan said that when chamber music groups convene at festivals and they decide to play this composition, “it’s like a chamber music jam.”  The challenge is the addition of the double bass:  its tone forces the other four musicians to recalibrate their voices to the rich, deep song of the double bass.  The first movement, Allegro con fuoco, was fast-paced but brilliantly clear.  The Scherzo promised to become one of Dvorak’s riffs on Czech folk dance, but only maintained that happy undertone; but the third movement was my favorite.  It was sweet and soothing and at the same time intense.  The Quintet finishes with a wild workout for the five very talented musicians.  And a word about Mr. Foley, the bassist.  It’s no wonder that he received an Avery Fisher Career Grant.  He nearly dances with his double bass and clearly enjoys his music. 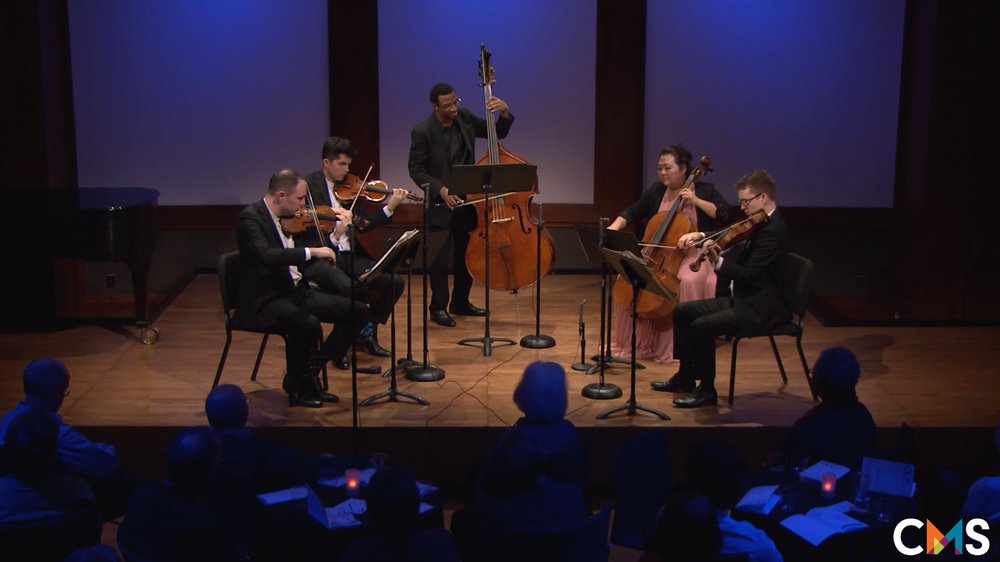 This concert will be available for viewing on our website sacms.org until midnight, Saturday, February 27, 2021.

So with gratitude to the Chamber Music Society of Lincoln Center, the San Antonio Chamber Music Society and the fabulous Calidore Quartet, I have at least a half smile to go with a full bag of ice.  This concert will be available for viewing on our website www.sacms.org  until midnight, Saturday February 27, 2021.

As series curator Wu Han said, we can hope to have many more years of performance by this group of dedicated musicians.  They have already achieved renown among chamber music aficionados around the world, and we were privileged to hear them in their professional “youth.”

Be sure to join us for our broadcast of the tenth concert of CMS Front Row National Artist Series.  You will find remarkable artistry and versatility when a classical clarinetist, Anthony McGill, the principal clarinetist of the New York Philharmonic, performs some truly sumptuous music.   The concert is March 14th at 3 p.m. on the San Antonio Chamber Music Society website (www.sacms.org).  Mark it on your calendar.