The Making of a Musician 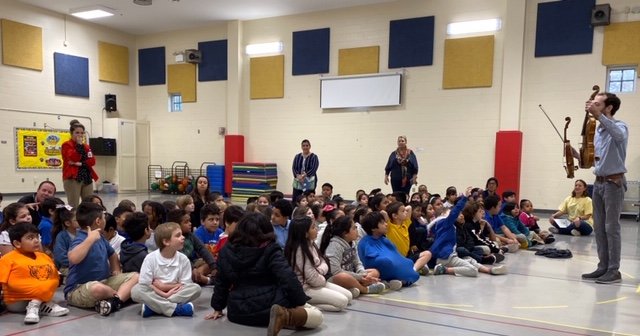 If you have read the posting by Allyson Dawkins, our Outreach and Education Chair, you already know we sponsor Monday concerts and classes at local schools; I know she has written about our last venture which was very successful, but I’d like to tell you my impression of the magic that happened in the school gym.

This elementary school accepts children who may require some help in addition to the regular standard curriculum. The Ariel String Quartet members (two violinists, a violist and a cellist) had performed a magnificent concert the day before, and they were ready, willing and most able to take on an audience that ranged in age from 7 to 10.  It was quite a cold morning, this Veterans’ Day, and the children were bundled up as they filed in from the playground where there had been a special commemoration to mark the day.  They were arranged by their teachers in rows, seated on the floor, and there was a hush of anticipation as the musicians tuned their instruments.

As they began to play, I surveyed the audience – fully expecting to see someone pinching a neighbor or whispering secrets, but they were quiet.  Then I noticed a young man in the first row.  His elbow rested on his knee and his chin rested on his hand as he leaned slightly forward.  He never moved.  I’m not sure he even blinked his eyes.  He was, to me, the Norman Rockwell personification of a boy who was completely caught in the gold and silver threads of the music.  I thought, as I watched him, so rapt, so attentive, “This is how musicians are made.”

I thought, as I watched him, so rapt, so attentive,
“This is how musicians are made.”

There were another two grades of young children who were ushered in by their teachers, and this group included a little bespectacled boy who sat by the door and commenced a Classic Meltdown.  He wept, he hollered, he banged his heels on the floor.  As the musicians began their concert, he became quiet and, after a while, I noticed he had crept closer to the main group, moving stealthily on hands and knees until he reached a few feet from the last row of children.  There he sat and, was he listening?  I couldn’t say for sure, but his head moved back and forth in time to the rhythm of the music.  Something had gotten through to this little fellow and I wished his parents could see the transformation that the music, classical music, had wrought.

I think we all know the magic of music:  how it makes us forget the every day, how it can ease worries and smooth the brows.  And how it can affect even rambunctious little boys, at least for a little while.  These two may never pick up a violin or write a score, but they may be future members of our audiences.  Like you and me.

Happy Thanksgiving, one and all, and be sure to mark January 26 on your new 2020 calendar.  That’s the date of our next concert, the Akropolis Reed Quintet.