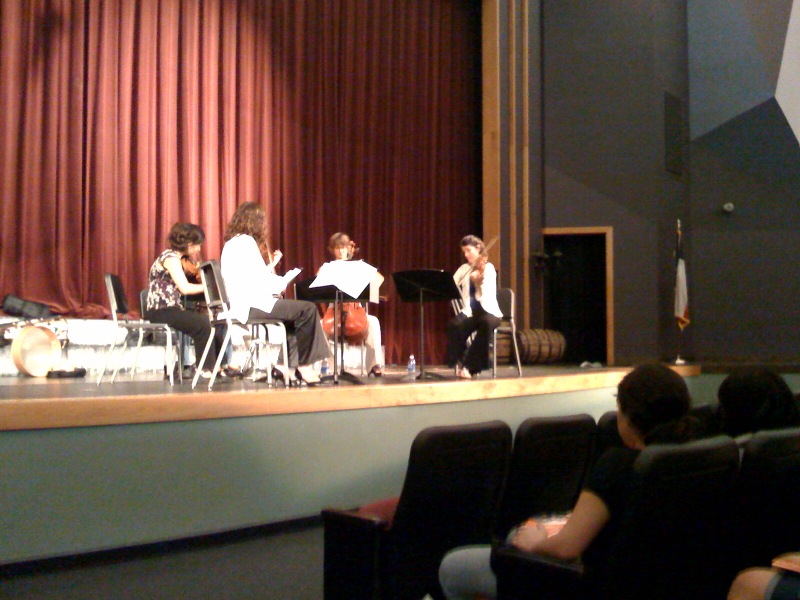 As the Lark Chamber Ensemble began setting up in the Reagan performing arts building, students watched with particular interest as Yousif Sheronick pulled out different percussion instruments. Orchestra and band students streamed in along with an economics teacher and his class. Yousif began the program by displaying what appeared to be a drum and describing how he had acquired it in Cairo, Egypt after a 2+ hour time of drinking tea with the shop owner and negotiating the price. Kathryn Lockwood, violist, introduced each Lark member and described what the audience would hear during Jennifer Higdon’s “An Exaltation of Larks for String Quartet”. Students had been scanning the October 4 SACMS concert programs distributed as they entered and seemed to realize that “different” music would be performed. The Lark played much of the October 4 program, albeit abbreviated. Before each piece was played, a member of the ensemble spoke to the audience about the composer and the music. When Kathryn told them about Daniel Roumain’s “String Quartet No. 5 ‘Parks’ “ also known as “Klap Ur Handz”, she explained that the Lark had commissioned the music in 2006. She asked for their help in placing Rosa Parks in historical perspective, noting that she had grown up in Australia. And then, just as she had done the previous day, she explained this was an interactive piece of music, with the audience needing to clap at many points during the music, albeit with her guidance. The students and teachers present definitely got into the music. Besides clapping during the Roumain work, the audience gave the Lark a rousing round of applause at the end of the concert. 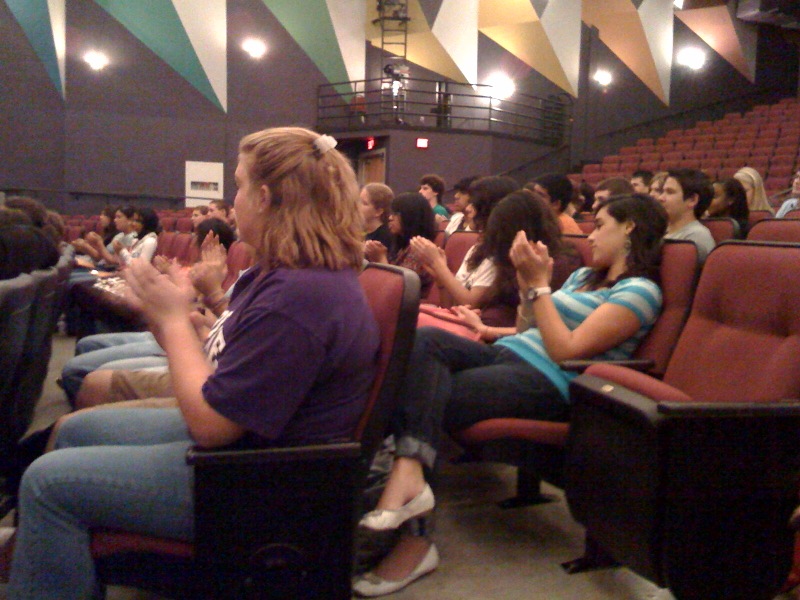 The Ensemble took questions—and asked questions—dealing with when members of the Lark started playing any instrument and their present instruments, how long they had played together, what instruments the students played, and whether any of them composed music. (Violins dominated and there were student composers.) As the musicians began packing up their instruments, several students came to the stage and spoke individually with them. It was clear that the Lark had touched many individuals in this student audience—a truly interactive concert! Board member Harvey Biskin and his wife, Bayla, enjoyed the concert and commented on the enthusiasm of the audience.

Nancy Taylor Shivers (Twice blessed to have heard the Lark on Sunday and Monday!)