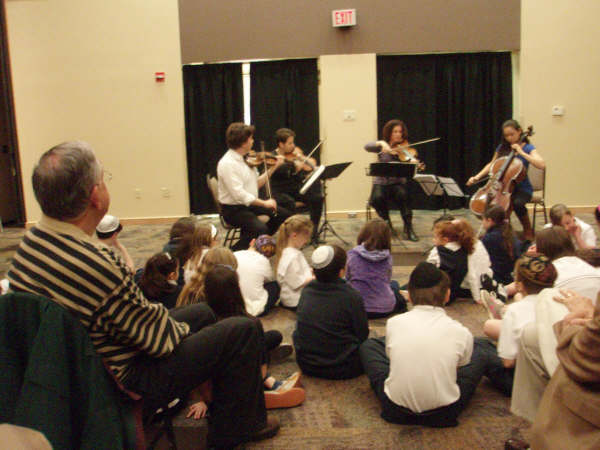 On Monday, March 16, 2009, the San Antonio Chamber Music Society was privileged to present the Aviv String Quartet in two outreach events. In the morning the quartet played at the Jewish Community Center for both young children (including 3 year-old toddlers!) and senior citizens. Aviv played a light program including movements from quartets by Haydn, Tchaikovsky, Borodin, and Shostakovich. Quartet members each told a little about themselves and their instruments, and also answered questions from audience members both young and old. The toddlers enjoyed the event immensely. When their joy and exuberance became too enthusiastic, they were escorted through the back exit by their teachers. It was heartwarming to witness the warm interchange between the quartet members and the members of the Jewish Community Center.

Being on a tight schedule, we whisked the quartet to Houston Street Bistro for a wonderful lunch attended by Allyson, Eileen, Nancy, Joe, and Jan. Then it was off to the Juvenile Detention Center.

We were met at the front door by our friend Chaplain Alvin Logan who escorted us to the gymnasium. The journey through the building itself is sobering. We have to wait between two locked doors of each chamber as we make our way through the labyrinth. Chaplain Logan has to lock and unlock sets of doors to keep us all together.

During lunch Sergey and I talked about varying the program at the JDC. I agreed with him that music with more tension would be appropriate. Once in the gym the quartet members took in the austerity of the room and all it symbolizes, and then quickly unpacked and prepared themselves mentally. Sergey was walking around the gym holding the microphone and mumbling to himself as he sought to find the perfect words to reach out to the incarcerated youths. 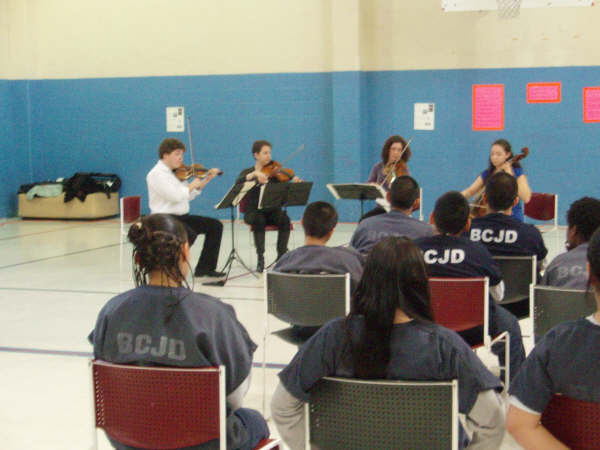 The quartet chose to start this concert with the first movement of Beethoven’s Serioso Quartet which has a startling and aggressive opening. Before they played Sergey talked to the teens about how “classical” music can express emotions including anger and fear. I am always interested in the initial response of adolescents to this type of dramatic music. Many laughed and then looked at each other with a combination of embarrassment and amazement. Then, one by one, they were taken in by the compelling power of the music and settled down to watch and listen intently. Before playing the Borodin Nocturne, Sergey noted that music can also express love and more sensitive and comforting emotions.

The audience at the JDC was silent in response to the invitation to ask questions. Sergey seemed painfully aware of the extreme reticence of the adolescents. He persisted and relaxed them by asking them questions. Gradually they began to speak up. One boy asked if the quartet played music for a living or for a hobby. Sergey answered, in a sophisticated way, that classical music performance is the occupation that each musician in the group chose. And they are all dedicated to their work. They undertake their jobs with responsibility and commitment. But he also acknowledged that musicians have a passion and love of their art; thus, they love their work.

The afternoon concert was attended by board members Paul Casperson, Allyson, Joe, Nancy and Jan. We were also fortunate to have Nathaniel Wilson, Superintendent of the Bexar County Juvenile Probation Department Detention Center present. He thanked the Aviv Quartet and the SACMS for their generosity and commitment to education.

Usually after performing, musicians are invigorated and “revved up”. After this concert, the Aviv Quartet members were visibly exhausted and drained. They all poured every ounce of energy they had into making this concert meaningful. And so to reiterate, it was a privilege to present the Aviv Quartet in these events. By the end of the day we had all developed a closeness and camaraderie that elicited not handshakes, but hugs of farewell.

Thank you Sergey, Evgenia, Shuli, and Rachel for sharing a great day with us!